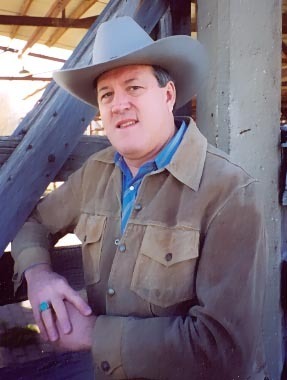 My in-depth look at
RAY HOGAN
and his works: 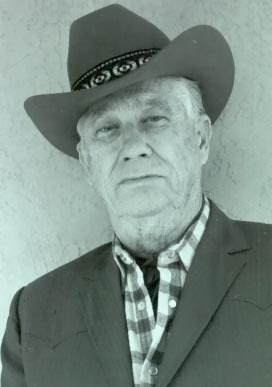 Series was one of
three finalists for
Western Writers
of America’s 1987
Stirrup Award for
best Roundup story.

Frederick Rice
grew up within that unique area known today as Big Bend National Park. The Texas Big Bend country he experienced as a youngster was different from the recreational area tourists enjoy today. However, that being said, Frederick mentioned many times while we were out and about that the mountains haven’t changed.

Based on extensive on-site interviews and backcountry Bronco-roaming experiences I had with Frederick starting in the fall of 1982. The cassette recorder purchased and used exclusively for this special project is almost played out, groaning and complaining during rewind (some today might wonder what rewind means). The once-smooth plastic play, stop, and rewind buttons now have fingertip indentations.

FREDERICK RICE:
HE WAS RAISED
DOWN THERE
The Alpine Avalanche
April 16, 1987

MANY THANKS TO THE AUTHORS GUILD FOR MAKING THIS
SITE POSSIBLE,

FOR ALL THE DEDICATED SERVICES THE AUTHORS GUILD STAFF PROVIDES FOR THE BENEFIT OF WRITERS EVERYWHERE.

An original traditional Western fiction novel rounded up, branded, and ready for the drive to market.

to keep you advised as to the publication date of this novel, and let you know the purchasing details when available. If you wish, please use the "HOLLER MY WAY!" quick link above to provide your contact information. Your personal data will only be utilized to inform you about HARD CASE FROM FLAT TOP and future releases. The information you provide will not be shared with anyone else.

Thanks for your interest!

In writing Hard Case From Flat Top, I strived to live up to the Ray Hogan Western tradition. One of America's master Western novelists, Hogan's trademark is a good story full of human interest and action set against a factual Western background. Ray was the inspiration behind this book, and I'm proud to have been one of his saddle pards.

JOHN CAMERON—famed throughout the West as the OMAHA KID, a hard-case shootist—put away his guns in 1878 to settle down and make something more permanent of his life by establishing a ranch in West Texas.

Now it’s 1882. On the morning he and his close friend and range boss Harvey Briscoe along with hired trail hands are to begin a cattle drive for Caldwell, Kansas—making his first big sale—his stock is stolen during a predawn raid. Badly wounded, the biggest shock surprising Cameron before blacking out and being left for dead was discovering who led the rustlers.

John Cameron is determined to make the thieves pay in full—especially their leader—if it’s the last thing he ever does. But, can he recover fast enough to track down the renegades before they sell the herd, grab their blood money, and scatter into the vastness of the Old West?

Will Cameron’s mission of retribution affect the longing he develops for Charity Sommerville who, along with her family, nurses the tall rancher back to health?

Gaining revenge will mean overcoming peace officers that continually get in his way just as they did during his Omaha Kid days—impeding his efforts to do what was really the law’s job anyway. And when you’re saddled with a fast-gun reputation like John Cameron, there’s always someone wanting to slap leather with you.

As if the odds of Cameron carrying out his vendetta aren’t high enough, there’s the vengeful Vingar clan. The Vingars have their own special plan for the Omaha Kid’s death.

Before it’s all over, the trail of revenge becomes longer than anticipated, taking unforeseen twists and turns. On a street of death amid strangers, shrouded by dust and gun smoke, John Cameron finally comes to know himself.

The images below were taken during legwork for HARD CASE FROM FLAT TOP. Meandering the backcountry without air conditioning during a prolonged triple-digit heat wave was memorable. Of course, it can always be worse: I could have covered the one-thousand-plus miles on one of John Cameron’s horses with no ice chest at hand.

Don’t be fooled by the late-May picture showing me in a sweater one cold West Texas morning; it didn’t last. June came, and I was soon solar-heating canned dinners on the dashboard with alarming ease. Have you ever heard a canteen make whistling noises out of its cap hole? Yeah—it was that kind of hot. 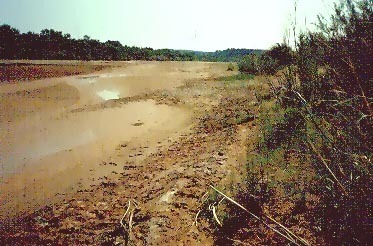 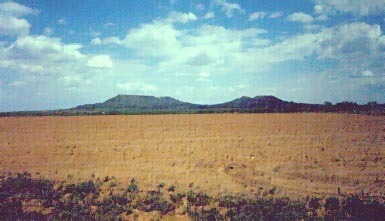 Double Mountain, Stonewall County, Texas.
The Double Mountain Fork of the Brazos River is named after this promontory.
Photo by Marc S. Rupert. 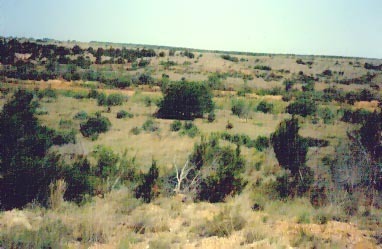 On the Flat Top JC Ranch looking north toward the river.
The fall-off’s edge, hard to detect, is in the foreground.
Photo by Marc S. Rupert. 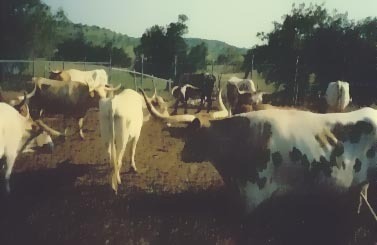 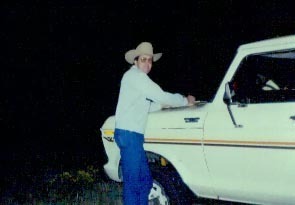 Author at the Flat Top JC Ranch engaged in predawn research.
The cold morning of the raid.
Photo by Larry Merrick. 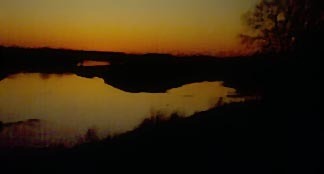 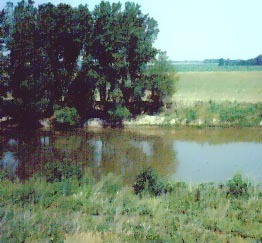 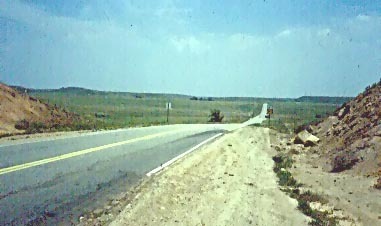 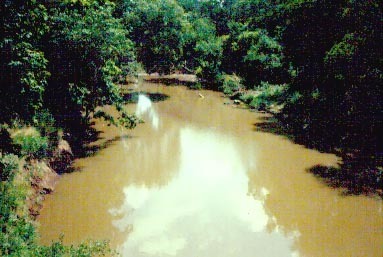 Bluff Creek.
Larger of the two Kansas streams cutting a path across the lowland between Caldwell, Kansas and the Oklahoma border.
Photo by Marc S. Rupert. 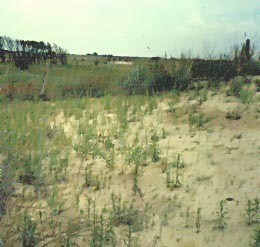 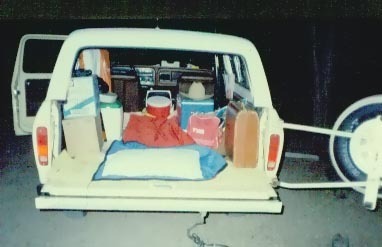 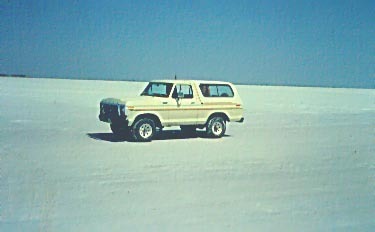 Great Salt Plains, Oklahoma.
This 1978 Ford Bronco has been the workhorse for many trips over the years.
Photo by Marc S. Rupert. 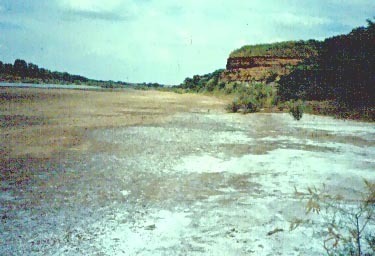 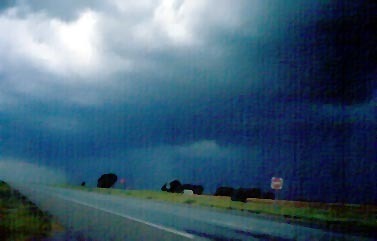 Churning clouds like these had John Cameron reaching for his yellow slicker. 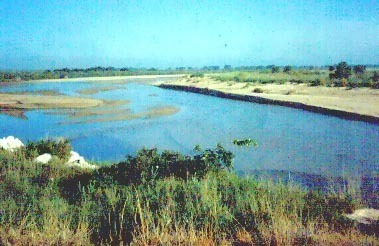 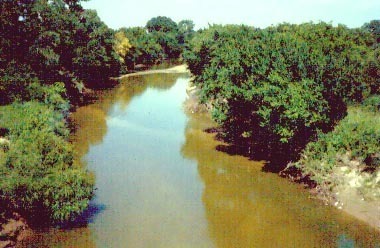 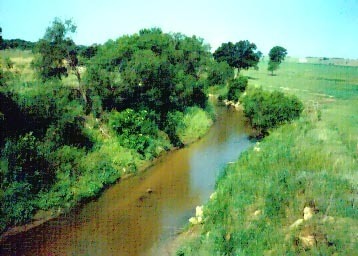 Coming into Fort Worth, Texas from the north.
Not exactly what John Cameron would have seen in the summer of 1882.
Photo by Marc S. Rupert. 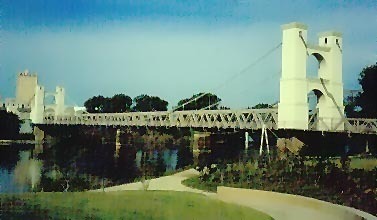 Suspension Bridge in Waco, Texas.
Opened in 1870, it was the first bridge over the Brazos—the longest river in Texas.
Quite an achievement for its day, and still something special to behold and stroll across.
Upon completion it was the longest singe-span suspension bridge in the United States—by some accounts the world.
Photo by Marc S. Rupert. 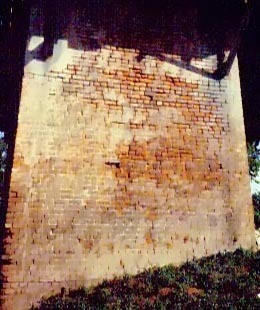 Brick base of Waco Suspension Bridge north tower.
What the towers looked like top-to-bottom when John Cameron rode past, before repairs saw the upper-section bricks stuccoed over, additional top arches added, and the crowning battlements done away with (above picture).
Photo by Marc S. Rupert. 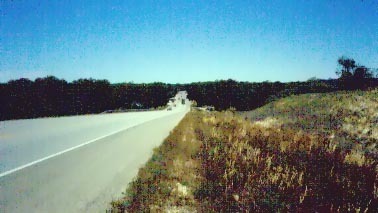 Hey—thanks for dropping by. I appreciate your visit.

Adios—but just for now. I'll be back on a regular basis. Hope you will, too. I wish you and yours all the best, especially during these stressful times.